The D4/R7 road project – one of the largest in Slovakia’s history – involves the design, construction, financing, and 30-year operation and maintenance of a section of Bratislava’s D4 ring road and part of the R7 expressway.

The deal was the first greenfield public–private partnership (PPP) project since the 2008-09 financial crisis and one of the largest European PPP deals of 2016.

The deal was also commended in the 2017 Financial Times Innovative Lawyers Europe report.

PPPs have had limited success in Slovakia. This was only the third PPP ever attempted in the country. The second PPP attempt in 2010 failed. Although it completed, the first in 2009 was heavily criticised by the political opposition in the Slovak National Council.

The pressure was on to show that PPPs could still be a viable way to improve the country’s roads.

The pressure was on to show that PPPs could still be a viable way to improve the country’s roads.

The first part of our work was to advise the Obchvat Nula ('Zero Bypass') consortium – comprising Cintra Infraestructuras Internacional, Macquarie Capital Group and PORR – on its bid.

Three other bidders were in the running, including a Vinci–Meridiam consortium that had been involved in the successful 2013 refinancing of the 2009 PPP.

The Slovak Ministry of Transport had estimated construction costs at €1.33bn and concession costs at €4.53bn over the 30 years, meaning annual payments to the concessionaire of up to €151m.

Our client’s winning bid was the only one that came in at under €1bn and offered the lowest annual payments amount, which represented significant savings to the Slovakian government and helped grow Slovak public confidence in the PPP.

Our client’s winning bid represented significant savings to the Slovakian government and helped grow Slovak public confidence in the PPP.

… but only after delays

The Slovak government announced our client as the preferred bidder in December 2015.

However, it took another five months for the concession agreement to be signed, caused by changes to EU accounting standards and the March 2016 parliamentary elections.

This delay put short-term pressure on the concessionaire. The six-month commitments provided by the various lenders – a mixture of multilateral and national banks – expired prior to financial close.

Meanwhile, over the six months, debt market margins moved up by 0.25–0.5 per cent. But the banks agreed to extend their commitments and the concessionaire was able to maintain its pricing. (Failure to do so would have required a re-tender.)

We had to ensure that not only the client but also the lenders were happy with proceedings. In this case, the delay to the bid signing was not the banks’ only concern.

We had to get them comfortable with:

We had to get lenders comfortable with the Slovakian-language concession agreement and Slovak insolvency law.

We also had to negotiate and draft agreements to allocate what portions of the projects were financed by which entity, as some multilaterals would fund only one of the two roads being built.

… and the government too

And when it came to the Slovak government, we had to:

The mandate was initially managed from our London office. However, we moved the operation to our Austrian office in Vienna, one-hour’s drive from Bratislava, where signing (20 May 2016) and financial close (one month later) took place.

The deal is a template for structuring future eastern European PPPs. Indeed, the Slovak government is planning a further PPP for the final section of the D4, which includes an 8km tunnel. 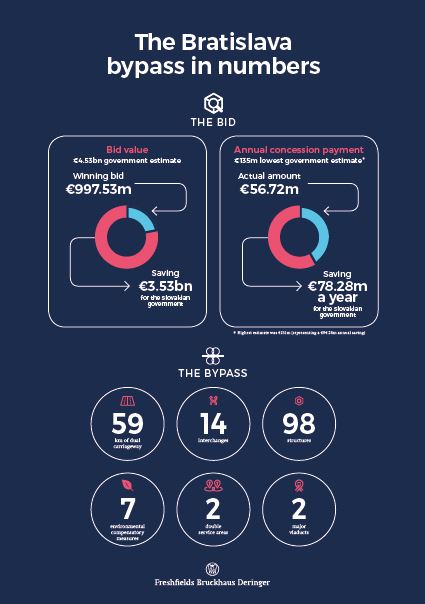 The Bratislava bypass in numbers