To build a picture of the most digitally focused countries, we analysed our data along geographic lines. To partially adjust for the discrepancy in national constituents (US companies outnumber UK businesses in the S&P Global 1200 by a factor of five for example), we looked at average deal volumes and values on a per-company basis.

Our analysis reveals that S&P Global 1200 constituents headquartered in China and the Netherlands were the most active acquirers of digital/tech assets between 2009 and 2017 (each completing an average of 4.6 deals or more), followed by those from Japan, Ireland, the US and Germany. The Netherlands and Ireland appear high on the list, but their figures are bolstered by the fact that many of their ‘national’ businesses are in reality multinational holding companies attracted by their  international outlook, supply of skilled workers and favourable regulatory regimes to this type of corporate entity.

The unexpected locations making their mark 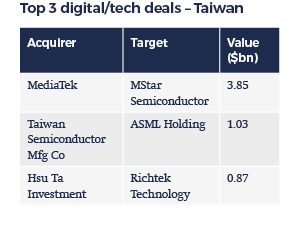 Further down the list some interesting stories emerge. Taiwanese companies score well (at an average of 3.4 acquisitions per company) with most of their digital/tech acquisitions in the semiconductor space. Four of Taiwan’s five biggest businesses are manufacturers of advanced electronics, with Foxconn the largest of them all.

Sweden also stands out at an average of three digital/tech deals per S&P constituent. It has a thriving tech industry inspired by the success of local entrepreneurs such as Daniel Ek (co-founder and CEO of Spotify) and Niklas Zennström (founder of Skype). According to TechCrunch, Stockholm has produced more ‘unicorns’ per capita than any other city in the world, while a Google-funded study from 2014 revealed that 18 per cent of working-age people in the city were employed in tech-related roles. Sweden devotes more than 3 per cent of its GDP to research and development – the third most in Europe – and is among the leading countries for researchers per head of population (6,877 per million inhabitants).

UK businesses on the other hand rank surprisingly low, completing an average of just 2.2 digital/tech deals over the nine-year period in our study. But as we will see in Part 4, plenty of UK digital/tech businesses are being acquired – just not by domestic buyers.

How much digital M&A is cross-border?

As recently as 2013 less than half (47 per cent) of digital/tech investment by the S&P Global 1200 was cross-border, but by 2017 that figure had risen to more than 58 per cent. Within these numbers there are again some fascinating regional nuances. US businesses were the most domestically focused (82 per cent of their digital/tech acquisitions were on home soil), reflecting Silicon Valley’s ability to produce a steady stream of attractive targets. When US buyers ventured further afield they predominately looked to Europe, in particular the UK (which accounted for 36.1 per cent of their cross-border deal activity).

China’s S&P Global 1200 constituents by contrast bought mainly outside their own country, completing more than half (56 per cent) of their digital/tech deals abroad. Of these acquisitions, most were in the Asia-Pacific region (40 per cent) although the US was also a significant nexus (35 per cent).

When looking at the average size of digital/tech deals on a country-by-country, basis our analysis shows that big Chinese companies spent the most ($1.47bn per acquisition) followed by those from the US ($1.26bn). This might be read as a sign of both the desire in China to develop a more technologically advanced economy and the fact that Chinese buyers are often expected to pay a premium in cross-border deals due to the uncertainty of securing regulatory approvals from Beijing. However, as we explain below, the figures for the US in particular mask the level of M&A activity driven by tech titans such as Google, Apple and Facebook.

The 10 biggest businesses in the S&P Global 1200 index - are all from the US, so does their presence skew our US numbers? And what conclusions can we draw about digital/tech investment in China when it only has eight companies on the list?

Businesses such as Google, Apple and Facebook are so large and so digitally focused that they almost need a category of their own. The fact that there are 478 US constituents in the index reduces the US average in our analysis to a level close to that of the rest of the world. But taken together, the 10 biggest US corporations account for 9 per cent of digital/tech deal volumes in our study – and 7 per cent of digital/tech spending.

As far as China is concerned, the level of activity driven by its handful of S&P constituents is startling. These eight companies were responsible for 37 digital/tech acquisitions, almost as many as Spain (which has 19 companies in the index) and more than Australia (which has 48).

It is worth reiterating that our analysis does not include wholly state-owned enterprises or privately held companies, which makes it harder to use our data set to draw conclusions about China as a whole. Chinese state-owned entrepreneurs have colossal buying power, and many of the country’s most active buyers of digital assets (such as Ant Financial) are private corporations, which fall outside our study. In addition companies such as Alibaba Group only listed in 2014, yet were very active on the international M&A scene before this point. Having said this, our study at the very least shows that China’s biggest public companies are among the most acquisitive in the digital/tech space.

Interact with the data