The AI patent boom: preparing for the AI era

The World Intellectual Property Organization’s (WIPO) first report of a series called WIPO Technology Trends, an extensive study of patent applications and other scientific documents, offers clues to the next big thing in AI.

Rather than treating ‘AI’ as a single homogeneous discipline (see our guide to AI terminology), the WIPO report divides it into AI techniques, AI functional applications and AI application fields , offering a finer-grained analysis.

Machine learning is included in more than one third of all identified inventions and represents 89 per cent of AI filings, the report finds. Between 2013 and 2016, filings related to deep learning rocketed by about 175 per cent. Sub-categories such as multi-task-learning, neural networks, latent representation, and unsupervised learning have also showed significant growth (WIPO Technology Trends 2019, p. 14-15, 31).

On a more granular level, the report uses AI functional applications to define functions performed by AI techniques independent of the field of application. The most prominent example is computer vision, including image recognition, natural language processing and speech processing.

Computer vision was mentioned in 49 per cent of all AI-related patents, with an annual average growth of 24 per cent. Within computer vision, biometrics has seen an average annual growth rate of 31 per cent and scene understanding a rate of 28 per cent. The other top areas are natural language processing (14 per cent of all AI-related patents) and speech processing (13 per cent), although applications related to robotics and control methods are also emerging fast (WIPO Technology Trends 2019, p. 31).

The most specific approach of the report examines in-practice AI application fields across  industries, sectors and disciplines.

AI plays the most important role in transportation (15 per cent of all AI-related patents), telecommunications (15 per cent), and life and medical sciences (13 per cent). Agriculture, manufacturing and computing in government are seeing significant increases in AI patent applications (WIPO Technology Trends 2019, p. 31-32).

The next big thing in AI investment and development

The majority of AI-related inventions (around 70 per cent) include a combination of AI technique, application and application field. WIPO recognised the following combinations of the three different analytic approaches as being most frequent in patent filings:

These combinations are likely the ones to watch in the short- to medium-term. Just recently, the UK IP office has published a similar report on AI patenting trends which is in line with the WIPO’s findings and confirms that the next big thing in AI investment and development is indeed in these areas (see our blog post on the UK report).

Japanese AI patent filings have been rolling in since the early 1980s. However, China has been dominant in the number of AI patent filings since 2014, followed by the US. Together, offices in Japan, China and the US account for 78 per cent of total AI patents (WIPO Technology Trends 2019, p. 32-33) . But European countries, and particularly Germany and the UK from what we see in practice, are also becoming significant players.

Currently, two-thirds of AI patents are filed at a single office, while 9 per cent are filed in five or more jurisdictions, and just 0.6 per cent are filed at more than 10 offices. Patent applications will likely become more international, not least because of the Patent Cooperation Treaty (PCT) system, which allows filing in multiple jurisdictions (including Europe) through a single application (WIPO Technology Trends 2019, p. 33).

The top patent applicants are active in consumer electronics, telecommunications and/or software, as well as electrical power and automobile manufacturing.

The 30 patent applicants by number of patent families 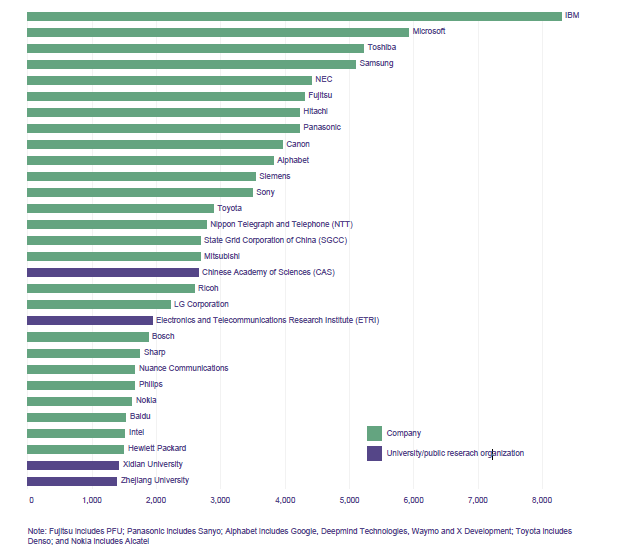 Machine learning is notable in top applicants’ portfolios. The sub-category of neural networks is highly relevant for machine learning, and – according to the report – the largest portfolios explicitly naming this technology belong to Siemens and State Grid Corporation of China (SGCC) with 677 and 650 patent families, respectively.

Data on legal disputes, and on the most active plaintiffs and defendants, comes from the Darts-IP and Orbit databases. Though not comprehensive, data reveals 1,264 AI patent families mentioned in litigation cases and 4,231 mentioned in opposition cases between 1975 and 2017 (WIPO Technology Trends 2019, p. 111).

Litigated patents most commonly involved machine learning, logic programming and fuzzy logic. Within machine learning, deep learning patents have yet to appear in litigation, probably because of the more recent applications of this technology.

The top plaintiffs are Nuance, American Vehicular Services and Automotive Technologies International. Microsoft, Apple and Alphabet have become top defendants. Siemens, Daimler and Giesecke+Devrient filed many oppositions to AI patents, while the main defendants in oppositions are Samsung, LG Corporation and Hyundai.

Preparing for the AI era

Patent law and technical trade secrets protection will play a central role in securing AI-related rights and asserting them against competitors. But IP-related legal advice must keep pace with the technological developments in AI. The most important legal considerations in AI patent law can be summarised as follows:

If you are a technology-driven company investing in AI and want to know how to prepare for the AI era, please visit our AI Hub.

Sonja Mross is an associate who advises on all areas of intellectual property law. Her primary focus is on patent litigation.

Wolrad Prinz zu Waldeck und Pyrmont is an intellectual property partner who specialises in the intersection of competition and patent law. Both are based in Düsseldorf.