Time to review your supply and distribution chains

In 2020, all businesses are advised to review the supply and distribution chains they depend on. Whether they source raw materials or components, purchase wholesale for on-selling, or sell luxury or high-tech goods to customers through different channels, the rise of e-commerce is raising multiple new legal issues (see theme 1).

As legal systems adapt to these changes, the challenge for businesses engaged in cross-border trade is not just to deal with changes in rules and policies, but also to factor in the differences of approach in different parts of the world:

In the United States, although vertical restraints have been the focus of a few recent high-profile cases and are at the centre of the ongoing big tech investigations, US companies generally enjoy a comparatively relaxed attitude towards vertical restraints on their home turf. As a result, it is important for them to keep abreast of the very different rules that prevail across the rest of the world.

After many years of enforcement being left largely to Europe’s national authorities, the last couple of years have seen an uptick in EU infringement decisions with a clear pipeline to come in 2020 and beyond. In fact, with cartel leniency applications down, resources appear to be being redeployed to focus on distribution practices and dominance investigations.

China will intervene to address not only China-specific issues but also whether distribution practices outside China have ramifications in China – and the State Administration for Market Regulation (SAMR) will come calling if it suspects infringements. It will continue to ramp up enforcement in this area, with RPM an especially hot focus, along with refusal to deal, exclusivity, tying/bundling and other forms of unilateral conduct that adversely affect the Chinese consumer and industry interests. New guidelines give advice on other terms, and coming case law should clarify how anti-competitive effects and efficiencies will be taken into account. Private actions are also on the rise: major platform JD.com, for example, has been joined by smaller platforms to sue another major online platform for allegedly imposing exclusivity commitments on its suppliers.

In just a few years China has placed itself centre stage, going rapidly from its first major case on RPM in 2013 to the broad range of infringements that it tackles today. 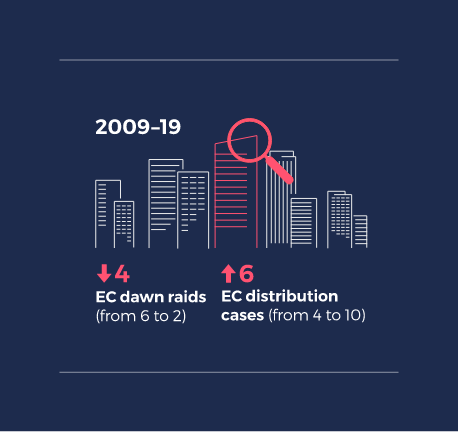 The EU is currently reviewing the regulation and guidelines that govern distribution practices to make them fit for the next decade. The review is still at an evaluation stage (a staff working document is expected in Q2/2020). This is a huge project and the specific changes will not be known for some time. But it is highly likely that there will be revised and new guidance in a broad range of areas, many of which concern e-commerce and platforms. They include:

Businesses still have time to make views known to the European Commission, and this will be welcomed if they bring new information or arguments to the debate.

The European Commission recently formalised a new settlement procedure for non-cartel cases, under which companies receive often significant fine reductions for co-operation in the infringement proceedings. In 2019, this benefited a number of companies and should be factored in as a possibility when a company uncovers wrongdoing or is faced with investigation.

Some EU member states such as Austria and Germany go further, offering full immunity (at least informally) where a company discloses an infringement such as RPM, presenting complicated strategic choices to a potential whistleblower if it is not clear which authority will take jurisdiction.

2020 may see a move towards convergence here, though the ECN+ Directive unfortunately does not address this point and only requires EU member states to have leniency programmes for horizontal restrictions.

The European Commission’s new settlement procedure for non-cartel cases is a great step forward, but it should now move to also offering full leniency, providing for a level playing field also for these types of infringements.

Be aware of procedural options: be familiar with the potential for fine reduction or even full immunity in different jurisdictions if you discover possibly illegal conduct or come under investigation.

Keep an eye on EU law reform: stay abreast of developments as the revised regime takes shape and make any concerns known to the Commission.

Delay internal revision exercises: any major review of corporate distribution policy will be more useful once the future shape of the EU rules is clear, which may not be until shortly before they enter into force in June 2022 (without prejudice, of course, to infringements of the current law having to be terminated without undue delay).

China has arrived: compliance and risk management now need to be taken as seriously in China as in Europe – use new guidelines to review your contracts and practices.

Abuse of superior bargaining position: watch out for jurisdictions such as Japan and Korea, as well as some European countries, where this concept may extend the range of prohibited conduct beyond the usual categories of antitrust infringement, particularly for big tech.

We have contributed to the European Commission’s ongoing review of its distribution rules and will continue to engage in discussions through 2020.