Assessing risk in an era of heightened intervention in deals

Which deals are likely to face greater scrutiny in 2020?

Transactions in innovative industries, such as pharmaceuticals and tech, remain high on the agenda of merger control authorities globally amid concerns about potential under-enforcement in recent years.

As competition authorities seek to predict the impact of proposed transactions on potential future competition in complex and rapidly evolving markets, companies planning strategic acquisitions need to prepare for a rigorous review.

Transactions involving digital markets remain an area of specific focus for merger review in view of their importance to the global economy and the difficulty of evaluating their impact on potential future competition. Authorities around the globe have held hearings, established task forces and commissioned studies considering the effectiveness of current merger control tools in digital markets, both whether the correct transactions are subject to the review process and whether reviewed transactions are being cleared when they should have been subject to remedies or prohibited altogether (see theme 1).

Many start-ups ultimately aim to be bought out by a larger company to give them access to better resources and a wider customer base. Whilst the impact of such acquisitions will in many cases be pro-competitive, authorities remain concerned that some of these transactions have the specific intention of slowing innovation and removing potential future competition: so-called ‘killer acquisitions’.

In view of the small size of such targets, which may not yet be revenue generating, these transactions are not necessarily subject to merger review in many jurisdictions. The US has always had a transaction value threshold for mandatory merger review (and revised it specifically after the internet boom to capture the acquisition of certain high-value, low-revenue targets), and the German and Austrian authorities introduced this in 2018 to catch transactions (particularly in digital markets) where turnover is low but valuation is high.

The European Commission canvassed opinion about introducing a transaction value threshold in 2017 but has not taken this forward so far, although Executive Vice-President Vestager has indicated her continuing interest in this area.

In their substantive review, authorities continue to grapple with how to analyse the specific features of digital markets, in particular access to data and network effects. Across all industries, the authorities’ focus on innovation theories of harm continues and companies should expect detailed review of this issue in future transactions. Particularly in focus is what merging parties’ plans would have been absent the transaction at hand and the impact of those alternative plans on market structure and competitiveness.

As antitrust authorities become more interventionist generally, borderline cases that might have been cleared five to ten years ago now face closer scrutiny and risk. Recent examples in the US include the Federal Trade Commission’s ongoing challenges to the Tronox/Cristal and Evonik/PeroxyChem mergers.

The EU General Court’s judgment in CK Hutchison’s challenge of the European Commission’s decision to prohibit its proposed acquisition of UK mobile operator O2 is also anticipated in the first half of 2020. This judgment is expected to be the first to review the ‘significant impediment to effective competition’ test that was introduced for EU merger review in 2004, and the Commission’s increasingly expansive interpretation of this standard over the last 10 years. The judgment will also be the first ruling by the EU Courts on what has been seen as a restrictive approach by the Commission to in-country consolidation in telecoms markets.

This follows the 2019 UPS judgment where the Court of Justice criticised the Commission for failure to disclose relevant evidence. That failure is now the basis for a €1.7bn damages claim by UPS against the Commission.

The role of evidence – internal and third party

As authorities seek to determine these increasingly complex issues within the confines of the merger review timetable, the parties’ internal documents are an important focus. Companies should anticipate significant internal document production as part of the review.

Whilst customer feedback has always been taken very seriously by merger control authorities, issues raised by competitors are increasingly playing into authorities’ theories of harm, and the parties will want to think carefully about likely third-party reactions in planning their merger review strategy.

Buyers should take particular care in evaluating potential synergies and how and where these might arise when assessing the business case for the transaction – careless wording can raise concerns about the buyer’s intentions that can be hard to dismiss. 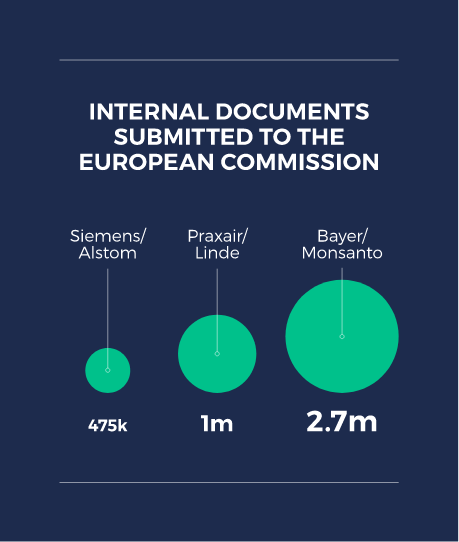 Impact on deal timing and certainty

With increasingly rigorous merger reviews around the globe, parties are seeking to provide for this in transaction documents through lengthening the period between signing and closing. Sellers wishing to achieve certainty of execution are requiring that buyers commit to making significant efforts to secure necessary merger control approvals, including seeking unconditional obligations to take all necessary steps to do so (‘hell or high water’ clauses). Both parties need to front load their antitrust analysis to be able to negotiate their position in relation to such requirements.

No buyer covenant to achieve closing (even a hell or high water commitment) is necessarily risk free. Where the outcome of regulatory review is uncertain, merger parties ought to be prepared to negotiate reverse termination fees that come due if the buyer fails to receive the requisite regulatory clearances. The nuances of the triggers of these fees, whether they constitute liquidated damages, whether they are payable in the form of cash or strategic assets, and the exceptions to the triggers are among the issues that can make a difference for a well-advised party.

The potentially lengthy period between signing and closing is a period of uncertainty for the target business, and buyers will want to limit the potential for value loss and the defection of key staff during that period. Continued vigilance around potential gun-jumping can be expected from authorities around the globe, and care must be taken in providing for buyer oversight of and decisions regarding the conduct of the target business pre-closing. Authorities may raise questions on deal protocols during the merger review, so it is critical that this does not go further than necessary to protect the value of the investment. Antitrust agencies have demonstrated their continued preference for structural (or quasi-structural) over behavioural remedies in recent cases. Remedies in innovation cases are almost always likely to be structural: the parties should think in terms of a stand-alone R&D unit unless it is possible to show that specific assets can be carved out without undermining their innovation potential. On the other hand, fair, reasonable and non-discriminatory (FRAND) type obligations would seem more likely to address concerns regarding big data. A 10-year series of FRAND commitments was recently accepted by the European Commission to address concerns regarding access to TV channels, streaming services and advertising space in relation to a proposed broadcasting acquisition.

If an authority has concerns regarding what it views as a “killer acquisition”, limited or targeted divestitures may not work (or be applicable) and the parties may need to convince the authority on the substance to avoid a prohibition or litigation.

The remedy process has become significantly more complex over the last 10 years – merger control authorities are taking more time to review and test the parties’ proposals and demanding larger commitments to address their concerns. The remedy process is dynamic and open to manipulation by interested third parties. Merging parties need to ensure there is enough time to address any concerns within the merger review timetable.

Concerns about the practicality of implementation and viability may lead to remedies that are greater in product and/or geographic scope than strictly necessary to remove the overlap between the parties. Fix-it-first or upfront buyer requirements are an increasingly material possibility to address viability concerns, and parties need to factor this into transaction planning. The parties may be prepared to accept a longer pre-notification period (including pre-notification market testing) to seek to reduce the authority’s concerns before the formal filing timeline starts, but need to ensure sufficient time remains at the back end of the transaction timetable to provide for remedies negotiation and implementation.

Antitrust authorities are market-testing remedies much more extensively than they did 10 years ago. The statutory deadlines for submitting remedy proposals do not always reflect this and may not provide enough time to negotiate a solution. It is therefore crucial to start the remedy process sufficiently early in the merger review.

An enhanced compliance culture is essential for acquisitive companies: internal documents are an increasingly important tool for merger review and authorities like to see documents written when the transaction was not yet in contemplation. You may not know what transactions you will want to do in the next two to five years, but you can try to avoid limiting your options through careless wording in your internal documents.

Given the importance attributed to customer feedback, consider likely customer reaction when assessing a potentially more difficult deal from a merger control perspective, and aim to address anticipated concerns in the merger filings.

Lack of resourcing may slow down the merger review if it is not possible to produce information or documents quickly in response to authorities’ requests. For larger-scale transactions, consider a dedicated project team to co-ordinate the merger review process, and whatever the size of your deal, ensure that the executives who will be contributing to the merger review understand the demands of the process. In cases where remedies may be needed, plan for these from the outset and be prepared to table remedies before the formal deadline to allow sufficient time before the end of the merger review for market testing and negotiation.