2021 saw the continued proliferation of investment screening regimes globally, with some jurisdictions implementing new regimes and others strengthening existing ones.

Moreover, the pandemic has contributed to heightened sensitivity that economic security and national security are two sides of the same coin, leading to a growing perception, and indeed risk, that some decisions by these investment screening bodies may be motivated as much by domestic political and economic concerns as by tangible risks to national security.

In the US, the first year of the Biden Administration has demonstrated that the Committee on Foreign Investment in the United States’ (CFIUS) approach to certain types of investment during the Trump Administration was more evolution than aberration. In 2020, CFIUS reviewed 313 filings from over 40 jurisdictions, but it continues to apply particular scrutiny to Chinese investments, including calling in deals post-closing and considering risks that principally arise from non-US activities. For non-Chinese investors, CFIUS’ China concerns can still impact a deal if the investor has significant connections to China.

The EU’s FDI screening regulation, which established an EU-wide framework in which the EC and the Member States can coordinate their actions on foreign investments, has now been fully operational for over a year with its first year seeing 11 Member States submitting 265 notifications under the cooperation mechanism (although more than 90 percent of those came from just five countries: Austria, France, Germany, Italy and Spain, all significant beneficiaries of foreign investment and countries that have the most active FDI regulators in Europe). The main sectors involved in the cases notified were manufacturing, information and communication technologies and financial services. In total, 1,793 cases were reported to national screening authorities in Europe. The EC intends to streamline procedures under the cooperation mechanism by launching a comprehensive review of the EU notification process.

Foreign investment review regimes continue to proliferate across the EU and it is likely only a matter of time before all Member States have some type of mechanism in place. Within this patchwork of national-level regulations, the principal challenge for the European Commission is ensuring that the EU’s now one-year-old, bloc-wide foreign investment screening regulation is implemented by Member States in a way that leads to more harmonization and does not add to the already increasing regulatory complexity of multijurisdictional deals.

Across the Channel, in April 2021, the UK passed legislation introducing for the first time in the UK a mandatory and suspensory regime for the screening of certain investments on national security grounds in 17 sensitive sectors. The National Security and Investment Act 2021 came into force on January 4, 2022 and the UK government expects it to affect up to 1,800 transactions per year, although officials expect only a very small number of them to require remedies as a condition to clearance. Unlike the UK’s merger control regime, the new regime will be mandatory and suspensory for certain sectors/transactions. The UK government will also have extensive powers to review any acquisition of “material influence” in a company, regardless of technology or sector.

While the UK government has stressed that its new nationality-agnostic national security screening regime does not represent any change in the UK’s approach to foreign investment, investors will be watching closely to see if the UK’s promise of a quick and efficient review process for the thousands of transactions required to be notified each year will be delivered. For those transactions that may give rise to national security concerns, getting the national security analysis right early in the deal planning process will be critical to effective execution.

China is now the leading country for inbound FDI globally, reflecting the Chinese government’s strategy to open up more parts of its economy to foreign businesses and widening the application of “national treatment” provisions. However, China has at the same time tightened its national security review regime, imposing mandatory notifications and setting up a formalized mechanism for the security review of foreign investment (both direct and indirect) in defense and related sectors (including land near military facilities) and sectors of importance for national security.

China is opening up more of its economy to foreign investment while simultaneously tightening its investment screening regime, including calling in deals for national security review post-closing. The increasing use of these powers makes performing a national security sensitivity analysis an important component of deal planning for companies seeking to take advantage of China’s more open foreign investment environment.

The Australian Foreign Investment Review Board remains very active, with significant reforms introduced in 2021 and a busy applications docket — it approved 8,221 applications in the most recent reported year (2019/20) with over 40 percent of those decisions made subject to conditions. Activity levels are expected to stay high with most reviews likely to be extended past the initial 30-day statutory period. Similarly, New Zealand’s Overseas Investment Office remains active in FDI screening. While the New Zealand government revoked the COVID-19 temporary emergency notification regime in June 2021, it also introduced a new “call-in” regime for investments in “strategically important businesses.”

FDI concerns can typically be mitigated by behavioral rather than structural remedies. Theories of harm are, however, often less clearly articulated and FDI authorities have a different approach to negotiations than in the merger context, so knowing the process and engaging with government stakeholders is often key.

In the US, CFIUS has broad authority to negotiate or impose mitigation remedies as a condition of clearing a transaction. CFIUS required mitigation remedies in approximately 12 percent of notices filed in 2020 (down slightly from 14 percent in 2019). Although remedies in specific cases are not published, examples of remedies adopted in 2020 include: limiting access to sensitive intellectual property, US government supply assurance agreements, network segregation, prior US government approval of business activities (e.g., vendor selection), onshoring requirements, equity caps, governance restrictions and targeted divestiture of sensitive assets.

Although for the most part there is substantive convergence between agencies on the issues arising in a particular transaction, governments may take different approaches to publicizing commitments. In most EU Member States, Australia and New Zealand, FDI decisions are not generally published, while in the UK notices of final orders made by the UK government will be published (subject to certain caveats).

Commitments might include maintaining domestic production capacity, protecting domestic R&D, protecting projected investment, ensuring compliance with existing contracts with public bodies and strategic companies and/or entering into commitments around security of supply for key products for governments. In the UK, previous national security interventions under the public interest regime have resulted in parties giving statutory commitments on board composition nationality requirements, information security commitments, continuity of supply and site security requirements. Prospective purchasers have also offered economic commitments (e.g., to maintain the location of the target’s headquarters, share listings, and core operations and to protect jobs) outside of the scope of the national security regime, particularly in relation to public deals. 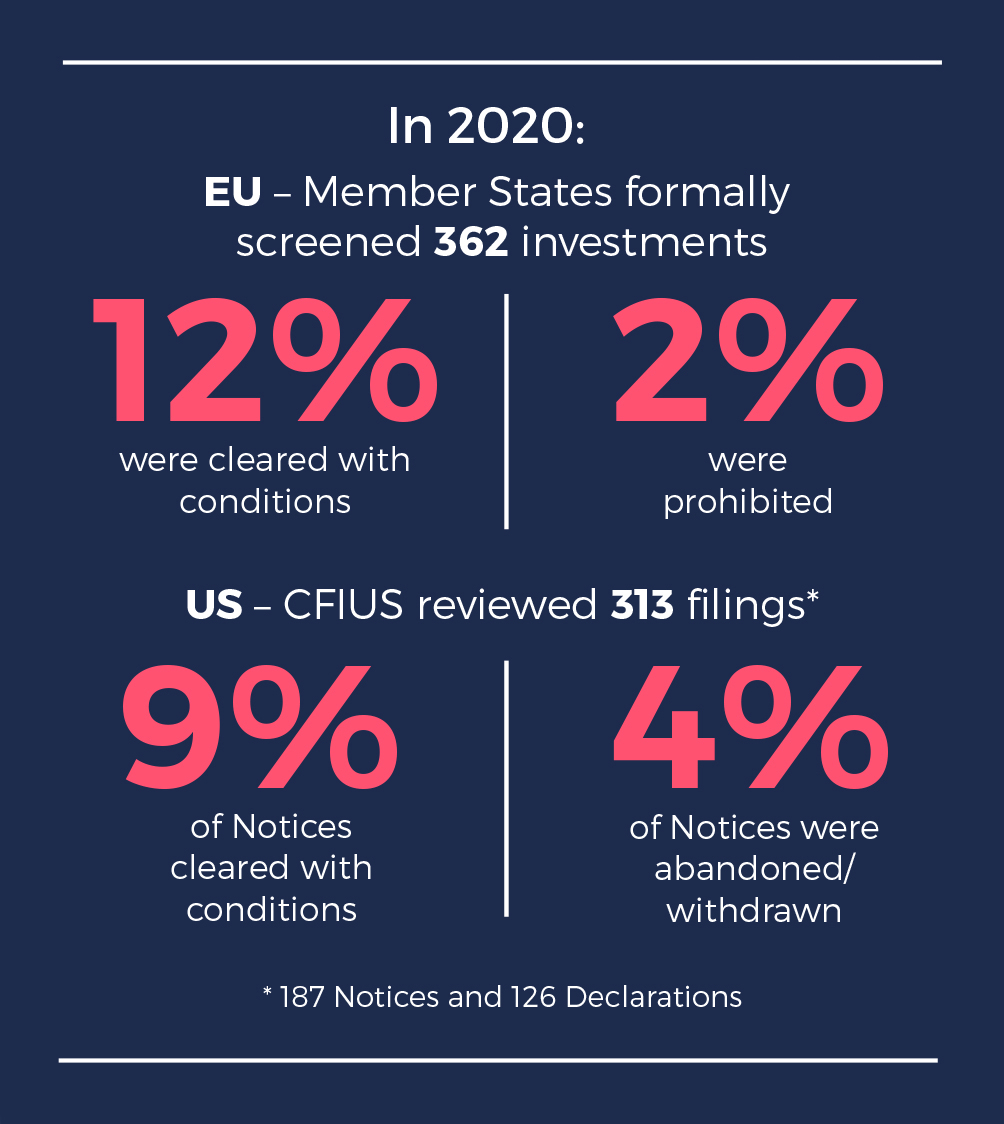 National security or something more?

Two interrelated geopolitical issues are likely driving the increase in investment screening regimes: increasing trade tensions and a rising tide of economic nationalism. The scale and speed of China’s rise has fueled concerns about eroding technological leadership across much of the rest of the developed world, notably the US and Europe. The US has engaged foreign partners to align investment screening policies vis-à-vis China in particular. While the US has a more distinct view of China as a geostrategic and military competitor, general concerns over China’s trade practices and unique brand of state capitalism are more widely held and have been a driver of investment screening policy changes in other jurisdictions with economic security becoming increasingly equated to national security.

Given that the Biden Administration shares the Trump Administration's view that economic security is national security, companies – including non-Chinese companies – looking to invest in technologies relevant to long-term economic competitiveness or to economically important supply chains may come under greater scrutiny, beyond the traditional factors of transfer of military and dual-use technologies, government supply security, and impact on critical infrastructure.

Even before the COVID-19 pandemic, an undercurrent of economic nationalism was driving discussions about onshoring critical supply chains and protecting the domestic technology and innovation base through a variety of public policy interventions. Many countries viewed new or enhanced investment screening regimes as an effective tool for maintaining control over critical infrastructure and fostering emerging industries.

The pandemic exacerbated these concerns by reinforcing perceptions about the importance of resilient domestic supply chains and, by implication, the undesirability of foreign investment in certain critical industries and sectors.

With thanks to Colin Costello and Iona Crawford for their contributions to this theme.

The increasing prevalence of stringent foreign investment regimes policed by active authorities across the globe means investors should:

Essential Foreign Investment: Episode #3: Development in the US and China