Where new laws and policies will bite

Companies planning deals in 2021 should plan for higher levels of regulatory intervention in many of the major jurisdictions, including:

As a result, some transactions which might not have otherwise been reviewed (or reviewed only in a light touch way) will be more likely to be subject to an in-depth investigation by authorities, including the EC, the CMA and/or US agencies. 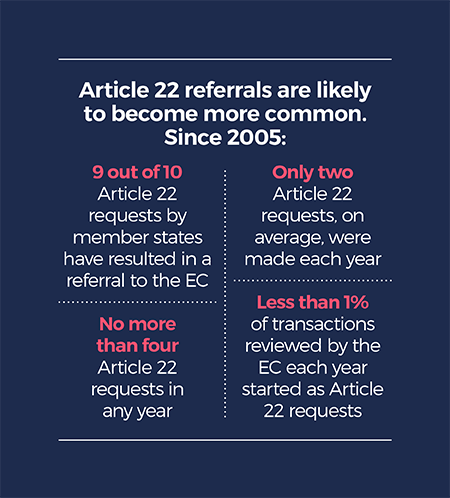 The EC has announced a new policy on referrals under Article 22 EU Merger Regulation (EUMR). It will encourage EU member states to refer certain transactions to the EC, even where the transaction does not meet the national merger control thresholds of the referring member states. Further guidance is due to be published in mid-2021. The policy change is largely directed at facilitating the review of so-called ‘killer acquisitions’, including in the digital and pharmaceutical industries, which might otherwise not trigger the (often revenue-based) jurisdictional thresholds of the EC and member states. This policy shift will increase uncertainty across all industries as to:

Our experience of working with both the EC and national competition authorities will help us anticipate the increased risk of Article 22 referrals going forward. Merger parties should prepare for more detailed assessments at the individual EU member state level and the possibility of seemingly smaller, localised transactions requiring EU merger clearance.

Following the end of the Brexit transition period, the CMA can now investigate transactions in parallel to the EC. No longer restricted by the EU’s ‘one stop shop’ principle, we can expect the CMA to claim jurisdiction over more transactions by taking advantage of its very flexible ‘share of supply’ jurisdictional test. Proactive engagement and co-ordination will be needed to manage the CMA process alongside merger control processes in other jurisdictions. Updated guidance by the CMA suggests that it may decide not to investigate transactions where remedies imposed or agreed in other jurisdictions would likely address any UK competition concerns, for example where all relevant markets are broader than national in scope.

The CMA has taken an increasingly expansive approach in its interpretation of the share of supply test, including in some of our recent matters, to capture transactions with a limited or tangential UK nexus. We expect this approach to continue post-Brexit, with the CMA having announced late last year that it aspires 'very much to be at the top table discussing international mergers'.

In the US, the Biden administration is widely expected to usher in a re-energised era of merger enforcement. Amid calls by some that there has been under-enforcement in several industries, including tech and pharma, we anticipate the agencies will use new tools or reinvigorate existing tools to catch acquisitions of nascent competitors, vertical transactions or minority acquisitions. These tools include use of the Federal Trade Commission Act’s Section 6(b) powers to conduct industry studies, breaking up past acquisitions deemed to have anti-competitive effects, rulemaking authority to regulate conduct ex ante and bringing (and potentially losing) more cases challenging deals.

For large digital or tech deals we may see the following (often controversial) proposals materialise in 2021:

With Democrats in control of the House and Senate, some of the more sweeping proposals from Congress and progressive critics have a chance of materialising, if not through legislation then through agency appointments. However, this area will continue to be the source of considerable debate and one that we are monitoring closely. One area that has received bipartisan support in Congress is increased funding for the antitrust agencies, which will likely lead to more investigations and potentially more merger challenges in court.

Common ownership concerns also continue to occupy the minds of policy-makers, coming to the forefront a few years ago in the EU during the Dow/DuPont merger. Research suggests that common ownership has become more common and the 2020 Common Shareholding in Europe report (commissioned by the EC’s Directorate-General for Competition) suggests the topic continues to be on agencies’ minds and is here to stay, particularly in transactions involving innovation. 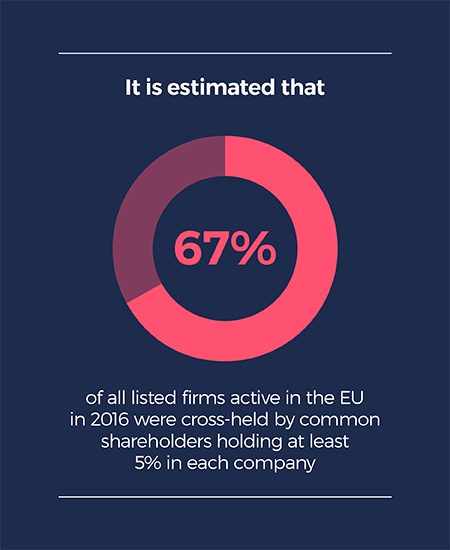 We also expect a greater focus on behavioural remedies in transactions involving big data, with the EC likely to take a more interventionist approach when considering data-related concerns. A wide spectrum of behavioural remedies relating to data – including data use/data silos, data access and interoperability standards – may become more common in the future.

2021 is expected to be a year of reflection on the effectiveness of merger control regimes globally. For example, the EC plans to review some of its recent decisions and their effects on prices, choice, quality and innovation. It will evaluate the performance of the merger rules in the light of digitisation, growing concentration levels and growing profits. The EC also plans to increase the use of simplified procedures and more streamlined processes, allowing more resources to be focused on transactions raising complex issues or novel concerns. In Germany, proposed reforms include increasing some of the turnover thresholds and some simplifications to the merger control procedures. In France, the introduction of an ex post merger control regime will continue to be explored.

In the US, the FTC will continue its Section 6(b) study on past acquisitions in the tech space and is likely to initiate other industry studies to evaluate the efficacy of prior enforcement and develop reforms.

The Chinese authority, the State Administration for Market Regulation (SAMR), has been consulting on proposed amendments to China’s Anti-Monopoly Law (AML). In the merger control sphere, the proposed changes include defining ‘control’ in the AML itself for the first time, higher penalties for gun-jumping, and provisions to allow the clock to be stopped during merger reviews.

Standstill obligations preventing closing and integration should not prevent merger parties from protecting their data and systems. With longer pre-closing periods, we are finding that it is all the more important to plan well in advance for cyber security, while still complying with laws against gun-jumping.

Common ownership: back on the regulatory agenda?