Antitrust in a changed world

The role of antitrust in driving sustainable economic growth

Diminishing faith in competition law – time for a reset?

Are antitrust and competition laws failing to deliver beneficial outcomes to consumers and should governments be intervening more to correct market failures and reverse growing inequalities in society? A growing academic consensus seems to think so. If politicians and authorities agree, businesses should prepare for a tougher enforcement environment in 2021.

The key complaint is that competition enforcers have failed to prevent a trend of increasing consolidation and concentration in markets, to check the power of leading firms or to protect consumers and citizens adequately from anti-competitive practices. In addition, the crisis hitting many sectors as a result of the pandemic has bolstered calls for closer alignment of antitrust laws with wider industrial and public policy concerns, such as national resilience, consumer protection, unfair trade practices and data privacy, with more politicians and authorities demanding a reset or reorientation of competition policy to help drive sustainable economic growth and recovery.

Debate on these matters has sparked a proliferation of investigations, inquiries and reports which consider a variety of broad questions, including:

Although these debates are still being had, it seems clear that change – and in some jurisdictions dramatic change – is being demanded and may soon be on the horizon.

Many governments around the world were already considering reviews of aspects of their competition regimes, whether due to concerns about concentration in certain sectors or due to events like Brexit in the UK. These reviews have now taken on a different character as a result of the pandemic, as governments seize the opportunity to implement broader policies under the cover of fostering sustainable growth post-COVID-19.

Implementing a more ambitious enforcement agenda – the steps so far

Competition agencies around the world are being urged to act more decisively and forcefully to safeguard the competitive process and to ensure that their policies and enforcement priorities not only protect consumers, but also address sustainability goals and inequalities in society (including those arising from regional imbalance, race and gender). Many are already taking the articulated concerns seriously and are, for example:

Consistent with the increasing public and political attention on antitrust issues and the recent election of Joe Biden, we are expecting further enforcement focus and profile from the US antitrust agencies. We anticipate that the federal antitrust agencies will come under continued political pressure to pursue enhanced enforcement, litigation and in-depth analysis of both merger control and single-firm conduct. Calls for legislative reforms to expand the scope of the antitrust laws are likely to continue, as well as the focus on large consumer-facing sectors such as tech and life sciences – with further focus on potentially extended theories of harm involving nascent competition, innovation and big data.

Safeguarding of national businesses operating in sensitive and strategic sectors

Fewer countries are now willing to accept unreservedly the benefits of free trade, open markets and foreign investment. The pandemic has focused attention on the importance of national resilience and autonomy of supply, accelerating a trend for new and tougher mechanisms to control foreign direct investment and other policies to protect national interests. These are principally being designed to protect businesses operating in sensitive and strategic sectors, including critical national infrastructure or advanced technologies and companies providing essential supplies to governments and emergency services, including military and dual-use sectors (see theme 4).

Although these regimes frequently operate in parallel to antitrust regimes, the concerns being addressed are often intertwined, particularly when authorities are influenced by political agendas and governments may be required to decide on remedies where national interests outweigh competition concerns.

A variety of measures are being contemplated across the globe to ensure that competition law and policy addresses perceived weaknesses and facilitates economic recovery. These include more active steps to tackle consumer harm, to foster competition in digital markets, to break down barriers to entry and to promote dynamic, innovation-driven competition which delivers benefits to consumers and businesses across the board. In 2021, we can expect to see: 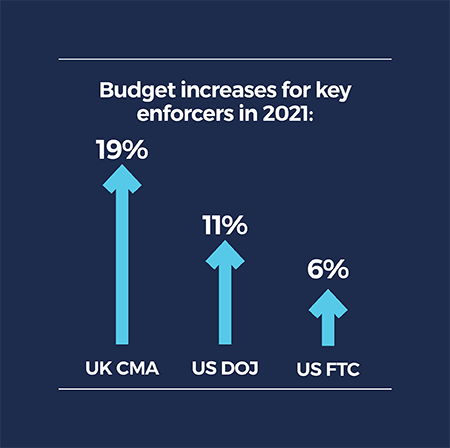 Next steps in both the US and the EU are keenly awaited, while new tools due to commence in other countries will be watched with interest. In Japan, a new monitoring review mechanism, overseen by the Ministry of Economy, Trade and Industry (METI) rather than the Japan Fair Trade Commission (JFTC), will commence for certain large platforms, which will include some mandatory disclosure requirements across a range of practices (see theme 5).

Although the European Commission has acted forcefully against a number of leading firms in recent years, it remains concerned about gaps in its current toolkit which it believes preclude timely and effective intervention against broader structural concerns. New tools and regulations to plug these perceived gaps are expected imminently.

Businesses must remain vigilant for reforms and new rules in a fast-changing regulatory environment and prepare for a more aggressive enforcement environment and greater scrutiny of:

View from the Valley: What will a Biden presidency mean for the global tech industry

Is antitrust reform on the horizon? The implications of the House Committee’s “Big Tech” report

Competition policy and the EU Green Deal: Freshfields responds to the Commission’s call for contributions

A Christmas present from Brussels: The Digital Markets Act