Methods for bringing individual or mass claims following antitrust decisions are continuing to evolve and claimants are being innovative in how they bring claims.  For example, in Germany, assignment models have been widely used by litigation funders to bring antitrust mass claims.  These models can and have been successfully challenged by us. 2021 will bring further case law (including at the appeals level) on the admissibility of such models.

In the UK, claimants are seeking to use the opt-out class action regime in the UK’s specialist competition claims tribunal for claims that arguably do not relate to substantive competition issues.  For example, two proposed opt-out collective proceedings relating to the sale of rail tickets to passengers relate to what are in substance allegations of consumer mis-selling.  However, by framing those claims as an alleged abuse of dominance claim, the claimants seek to be able to use the antitrust-only opt-out class action rules.

There is increasing elision of antitrust and consumer issues such that the silos between them are breaking down. So business cannot assume general consumer redress development will have no or little impact in the antitrust sphere.

Procedures in antitrust claims are also developing.  Perhaps surprisingly, in some jurisdictions expert evidence is not always used to assess overcharge levels and therefore damages.  In Germany, the District Court of Dortmund recently issued a decision awarding a 15 per cent overcharge plus interest and excluding any pass-on by the claimants to their own customers, without relying on any expert evidence.  Similarly, a number of courts in Spain (in Valencia, Barcelona and Pontevedra) have assessed damages in follow-on antitrust claims as being around 5 per cent of the relevant purchase prices, again without having significant regard to expert evidence.  Will this rough-and-ready approach be upheld upon appeal and/or spread to other countries?

In Germany, we expect further guidance in 2021 from our Federal Supreme Court in cartel damage matters, including on questions like presumption of harm, damage calculation and passing on. Also the big leading cartel damages cases will make further progress.

In the UK, the Merricks v Mastercard Supreme Court decision handed down in December 2020 resulted in a remittal of the case back to the first instance tribunal for a re-hearing on class certification.  However, given the untimely death of one of the UK Supreme Court Justices who heard the case before judgment was handed down, the reasoning of the Court was left split on key issues.  These will need to be considered further by the tribunal in that case and in the upcoming certification hearings in a series of other cases, which have been on hold pending the Supreme Court judgment.  2021 will therefore be a pivotal year in the development of the UK’s class action antitrust regime.

In Spain, the number of antitrust damages cases in the commercial courts has multiplied by 1,000 per cent in less than two years. Procedural changes introduced by the EU’s 2014 Antitrust Damages Directive, such as granting claimants in antitrust damages claims minimum rights to discovery of the defendants’ documents, are now affecting the conduct of such claims in civil law jurisdictions that previously did not provide for documentary disclosure.  With the increase in volume of cases, and the volume of evidence in each case, this is likely to prove to be challenging for the courts to manage and may give rise to disparities of approach across different EU member states.

Identifying the litigation risks attached to any antitrust infringement early on will be vital. Some countries have short litigation deadlines and concentrated trials; a comprehensive approach across various and different jurisdictions is critical to being successful. 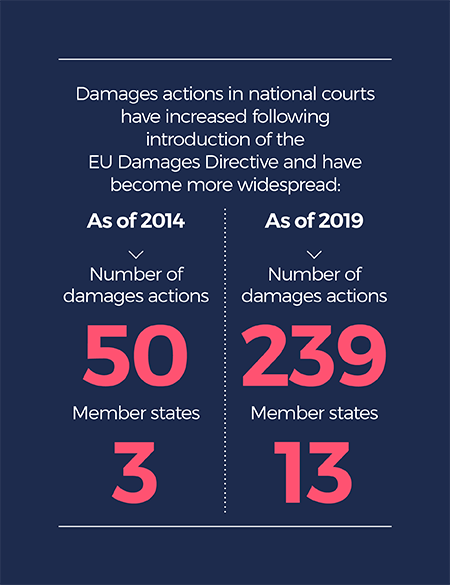 In the US, appellate courts are continuing to refine developed standards for class certification.  In particular, the Ninth Circuit is considering appeals in cases addressing whether indirect purchasers who reside outside of California can recover antitrust damages under California law.  It is also considering under what circumstances to allow a class action to proceed when some, but not all, class members are alleged to have been injured by the challenged conduct.  Because the Ninth Circuit includes some of the most active antitrust courts in the country, those decisions have the potential to have an outsized impact.  Another significant development has been the confirmation of Justice Amy Coney Barrett to the Supreme Court.  Her prior writings do not reveal much about how she will approach antitrust class actions in the coming years, and it will be interesting to watch how closely she hews to the generally defence-friendly views of her mentor, the late Justice Antonin Scalia.

Although antitrust class actions have been a part of the US legal system for decades, the law is constantly evolving, creating new opportunities for those who follow these developments closely and new traps for the inattentive.