Working with innovators since 1855.

Freshfields and the sea

Innovation has always been in Freshfields’ DNA – the firm has been closely involved in all the most transformative developments of the last three centuries.

The credo of modern disruptors is ‘move fast and break things’. In the 19th century – as now – it was left to lawyers to pick up the pieces. The famous Great Eastern steamship – by far the largest ship ever built at the time – was no exception. Designed by Isambard Kingdom Brunel, she could carry 4,000 people to Australia without refuelling, making her faster and cheaper to operate.

The 1853 contract to construct Great Eastern was complicated and had to be modified the following year. Charles Freshfield was brought in.

Charles’ responsibilities expanded in 1855 when technical difficulties delayed the project and frictions between Brunel and the shipbuilder, Scott Russell, turned acrimonious. Russell then ran into financial problems, which Charles was asked to examine. The new 1856 contract shows the depth of Charles’ engagement with technical problems:

A letter to Brunel refers to ‘the variation about the weight of iron’.

The wrangling continued and financial problems worsened. Freshfields’ role again expanded to acting for both the liquidators and for Scott Russell personally. A new agreement was drawn up by Charles Freshfield in April 1856. She was successfully launched in 1858, carrying passengers across the Atlantic and ended her service laying the first lasting transatlantic telegraph cable, enabling telecommunication between Europe and North America.

Message to the Orient

Freshfields was also involved in opening routes to Asia. The Peninsular and Oriental Steam Navigation Company (now P&O) became a Freshfields client in 1878. Now associated with ferries and cruises, in the 19th century P&O had mail contracts to Gibraltar and India and had extended its services in the 185os to Ceylon (now Sri Lanka), Shanghai and Japan. Our lawyers dealt with both ‘wet’ (including regular work in the Admiralty Courts on collision cases) and ‘dry’ matters (interpretation of clauses in Charters and Deed of Settlement, and the drafting of new ones). P&O’s lack of in-house counsel meant we also advised on claims relating to lost or damaged baggage, including one passenger from India who alleged the smell of the cargo had made him ill.

Other matters helped ease trade flow. The Suez Canal, built and owned by the French, was opened in 1869, but French harassment of British shipping passing through the Canal had constrained its positive effects on world trade. In 1884 P&O bought shares in the Suez Canal Company to qualify its chairman as a member of its Board. Questions over the legality of this with regard to the Deed of Settlement of settlement were resolved by Freshfields’ interpretation of the transaction, not as an investment, but rather as ‘an outlay necessary to be made in the interest of the Company’. Harassment decreased. Isambard Kingdom Brunel FRS, was an English mechanical and civil engineer who is considered ‘one of the most ingenious and prolific figures in engineering history’. 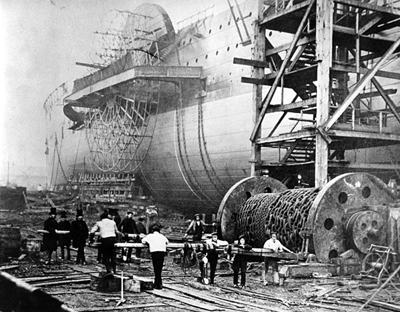