A tradition of meritocracy

Freshfields has always attracted the most talented lawyers. Few realise that this tradition of excellence stretches back to the foundations of the firm, and that it is based not on privilege but meritocracy.

James William Freshfield was the first member of the Freshfields family to join the firm (although not our first partner). His story is one of overcoming obstacles through dedication and aptitude, a situation familiar to many in today’s firm. His adopted coat of arms includes the archangel Saint Michael, the iconic ‘Freshfields angel’ which we still use today.

The emergence of the Freshfields family from eighteenth century obscurity and poverty into nineteenth-century affluence and respectability is perhaps best summarised by his great grandson:

[A] very simple and commonplace story of an ambitious man to whom opportunities came during the great social changes at the beginning of the nineteenth century after the Napoleonic Wars.

James William came from a decidedly humble background. His grandfather was born in 1727 on the Isle of Wight and, like many other young men of the time, came to London to seek his fortune. He is recorded as a watch-case maker in Smithfield. London was a famed watchmaking centre, much as Switzerland is today. However, the cutting-edge nature of the technology means that a comparison with Silicon Valley or the automotive centres of Germany is perhaps more apt. As with other transformative technologies, the risk of failure was significant. James Freshfield senior was declared bankrupt twice, in 1755 and 1774, spending time in the infamous Fleet prison.

His son, another James Freshfield (born 1751) also entered the clockmaking trade as a watchmaker at King’s Head Court, Holborn and later, like his father, in Smithfield. The Freshfields were already climbing the social ladder: unlike watch-case makers, watchmakers were the elite of the trade; James was a freeman of the Clockmakers’ Company from 1774 until his death in 1803. Still, the family remained of distinctly modest means – watchmaking was low-income occupation.

His first child, born on 8 April 1775, our ‘first Freshfield’, was the eldest of nine children, few of whom seem to have survived. Little is known about his life and education before November 1790 when he was apprenticed to “Owen Jones, Clockmaker of George Street”. Interestingly, the payment of £10 to Jones (common practice at the time) was made by the Trustees of Dr. Bromfield’s Charity in Holborn. That his own family did not pay for his apprenticeship is suggestive of modest means. The records show that James William I was admitted as an attorney at the age of 20 in 1795. Leaving an established trade Law may seem an odd choice for a hard-up young man unlikely to have the connections needed to thrive. But clockmaking was becoming less attractive. Pressures to pay for the French Revolutionary Wars had resulted in a heavy tax put on clocks and watches in 1797. Although it was lifted a year later, production had been halved and the trade never recovered.

James William I was first practising alone in his father’s former house in Smithfield. Early in 1800, he joined Winter & Kaye as a partner. The firm would in time come to bear his name alone and he was a partner for the next 40 years. On 26 November 1818, James William Freshfield and Charles Kaye were appointed joint Solicitors to the Bank of England with Joseph Kaye.

How did a young attorney 25 years old from an obscure family and seemingly of very modest means come to join this already eminent City firm? Unfortunately, we have no concrete information but his achievements suggest ability and dedication. Certainly he showed both in his subsequent career.

Having reached the apex of the legal industry, in 1826, at the age of 51, James William became a candidate for election to Parliament, an unusual step for a City lawyer at the time.

Unsuccessful initially, he was elected in 1830 and he sat in the House of Commons for Penryn in Cornwall until 1832. In 1835 he was elected for the new constituency of Falmouth and Penryn, which he represented until 1841, then again 1852-7. He retired the same year aged 82.

In many ways James is a model for Freshfields lawyers of today: his rare combination of natural aptitude and dedication laid the foundations for the enthusiastic, engaged teamwork our clients still cherish. Following James’ successful career, for two centuries Freshfields has strived to attract and retain the most talented people, whatever their background.

This awareness has also shaped the firm, putting responsibility at the centre of our business. Initiatives like our LBGT+ Halo network, membership of the 30% Club and the Freshfields Stephen Lawrence Scholarship are throwing the net wide to create a welcoming, positive and supportive environment in which all can flourish, regardless of their gender, race or ethnicity, background, religion, physical abilities, sexual orientation or gender identity. Portrait of James William I

The coat of arms associated with the Freshfield family did not originally belong to them. The oldest recognisable coat of arms to feature the angel is above the main entrance of Staveley Hall in Derbyshire. Staveley Hall in its present form was built by Sir Peter Frecheville in 1604 but there have been buildings on the site for over 700 years. In fact, Hascuit de Musard was awarded the Manor of Staveley after the Norman Conquest of 1066 (the Frecheville family also came to England with William the Conqueror, with the first definite reference to them in Staveley, Derbyshire in about 1200). In 1306 the Musard family died out and Ralph de Frecheville became the new Lord. In 1603 Sir Peter de Frecheville was knighted by James 1 at Worksop and he wished to make Staveley Hall a suitable residence for a knight and Justice of the Peace. The Frechevilles lived in the Hall until they died out in 1682.

How did the angel at the top come to be associated with our firm?

James William I, who began as a watchmaker’s apprentice, joined the firm in 1800. Society remained stratified with the aristocracy at the top (making James’ achievements all the more remarkable). Climbing the social ladder to apex of society as he did (becoming an MP) , he understandably wanted to establish the social position of his family. A coat of arms was at that time an essential component. In a letter he wrote in March 1850 to his son (a copy of which is still in the firm’s archives), James says:

Being now about to use the arms very publicly in connection with the Office of Sheriff; I thought it prudent to consult a friend in the College of Arms… [on] claiming the Arms… The result was that… any descendant of mine attaining to any post or particular rank even that of a Knight would have to establish a right to the Arms which he could never do

The College of Arms granted the Freshfield family that arms, as James says, with “some alteration in the cross on the head of St. Michael & placed an additional Cross on the breast”.

You can see the family coat of arms on a stamp (still stored in the London archives) used on family letters:

The angel at the top, which represents St Michael with a spear, later became the firm’s mark. The firm’s angel underwent its own evolution as Freshfields became a more corporate firm. 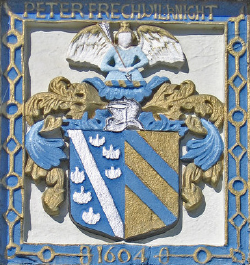