Yuichiro Watanabe, Senior Legal Counsel and Head of the Legal Department at Airbnb Japan, was a Freshfields associate between 2009 and 2011. He tells our Alumni Network about helping put in place the world’s first home-sharing law in Japan.

The youngest ever person to win the Japan Law Awards In-House Lawyer of the Year prize in 2018, Yuichiro is also winner of Innovative In-House Team of the Year 2018 for his work on a new home-sharing law and amendments to a tour guide law in Japan.

He says that he may very easily have never joined Freshfields at all. 'I actually spent a long time deciding whether I should join one of the big four Japanese firms,' Yuichiro says. 'But I opted for Freshfields because I thought that it could give me the challenges I needed to grow as a lawyer. My first impression was that everyone was really professional and very smart. I learned a lot while at the firm.'

Yuichiro says partner Takeshi Nakao continues to be a mentor and he recalls working with partner Ed Cole, who, he says, 'always encourages associates and gave me a lot of insight into how a professional lawyer should behave, study and respect clients,' lessons Yuichiro continues to draw upon at Airbnb.

One mandate stands out, although not for the work itself. 'A Japanese company trying to list on the Hong Kong stock exchange around eight years ago, which was when we had the great east Japan earthquake and tsunami,' Yuichiro recalls. 'The country had been devastated but we still had to proceed with preparing the listing documentation just three weeks afterwards. People were coming into the office wearing helmets and safety gear but we finished our client work. I still think of it as an example of Freshfields’ professionalism and client service.'

Nevertheless, life in house has some benefits, Yuichiro says, including having at least some time to spend with his family and seeing from the inside how transactions can transform an organisation. 'Working at a law firm, we sometimes don’t know what happens after a transaction apart from what we read in the newspapers.'

Yuichiro says he was attracted to Airbnb with the mission of creating a world where 'anyone can belong anywhere' in part because of the greater efficiency and sustainability their disruptive 'sharing economy' business model offers.

'Sustainability is an important mission for Airbnb,' he says. 'In Japan we have eight million vacant homes but continue with new construction. I personally believe that, if we can utilise these premises, we can offer a model of sustainable economic benefits, not only in Japan but also elsewhere.'

The benefits go beyond sustainability though: Yuichiro claims that Airbnb data shows that its guests tend to eschew normal tourist draws like the Tokyo Tower in favour of trips to rural areas and more meaningful engagement with Japanese culture 'I think travellers are changing and their interests are now more diverse.'

Despite its current strengths, when Yuichiro joined Airbnb it was operating in a legal grey area. The regulatory framework was outdated, put in place around 70 years before the arrival of the internet. With literally millions of travellers using Airbnb in Japan – the largest Airbnb market across the Asia-Pacific region – new rules were urgently needed.

Indeed, Yuichiro’s biggest success at Airbnb to date was helping bring about a new home-sharing law that has solidified Airbnb’s business model.

The existing legislation dated from 1948 and was no longer fit-for-purpose. Yuichiro says he liaised with the Government to explain how home sharing could empower Japan. 'It took almost four years because, culturally, Japanese people are not used to sharing residences with other people.'

However, Yuichiro undertook comprehensive comparative legal research to make his case, then discussed legal issues in the draft laws with policymakers. He worked with the Japan Regulatory Reform Council to push for a new Act, submitting Airbnb’s and third-party’s professional legal opinions.

In June 2017, Japan’s national parliament, the Diet, green lighted home-sharing with the Housing Accommodation Business Act. This first such national law in the world sets out rules allowing home sharing, and provides much-needed clarity and certainty for local people who want to earn additional income by sharing their space on Airbnb.

As a new business model at the forefront of largely new regulatory hurdles, this major policy success in Japan is the way forward for home-sharing regulation that is clear, simple and easy to understand while reflecting local needs.

Airbnb’s recent partnership with the International Olympic Committee (IOC) ahead of this summer’s Tokyo Olympics will help cement this new standard for hosting spectators and athletes alike. 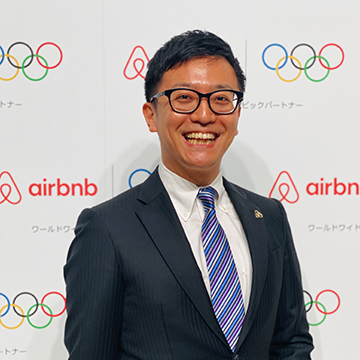